The daily price limits for Chicago Board of Trade corn and soft red winter (SRW) wheat futures are set to rise by a nickel per bushel, while the soybean limits will remain at the current level of 70 cents per bushel.

The new limits will go into effect on Thursday, April 30, for May 1 trading.

Under a variable price limits mechanism implemented in May 2014, the CBOT resets daily limits for grains and oilseeds in May and November of each year, based on a percentage of the average settlement price of benchmark contracts during a roughly nine-week observation period.

The daily limit for soyoil futures will fall to 2 cents per pound from the current 2.5 cents, while the limit for soymeal contracts will stay at $25 per short ton.

The limit on rough rice futures will decline to 75 cents per hundredweight from 90 cents, while the limit for oats will fall to 20 cents per bushel from 25 cents.

Daily limits are lifted for the spot month contract on or after the second business day preceding the first day of the delivery month.

Limits for all grain futures can be expanded if two or more contract months within the first seven listed non-spot contracts (or the last remaining contract in a marketing year) settle limit up or limit down. 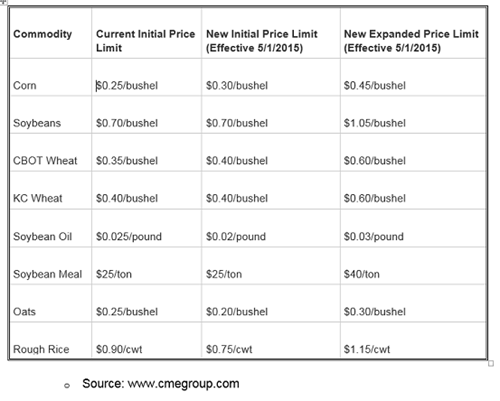