As we’ve pointed out in The Brock Report, the expiration of several accelerated write-offs for capital investments will affect many farmers.

For the past four years (2010-2013), if the cost of purchases such as farm equipments or grain bins was treated as an expense, the maximum deduction a farm could take in a single year was $500,000. If the expiration is allowed to stand, the expensing limit falls to just $25,000 for tax year 2014. This change could increase the cost of capital investment and significantly increase taxable income for some farms.

Based on 2012 USDA data, while 38% of U.S. family farms reported a capital purchase, fewer than 1% had expenses exceeding $500,000. Under a $25,000 expensing limit, 13% of farms would have exceeded the limit. Smaller family farms, in general, did not make investments exceeding the old limit, but about 9% would have exceeded the 2014 limit. Very large commercial family farms (those with gross cash farm income in excess of $5 million) were far more likely to have capital costs exceeding both the old limit (35%) and the 2014 limit (78%). (See graph below.)

This means more capital investments will have to be depreciated rather than expensed. Another approach, as explained by Jack Juelich of CoBank/Farm Credit Leasing at the Brock Agricultural Economic Symposium earlier this year, would be to lease rather than buy. 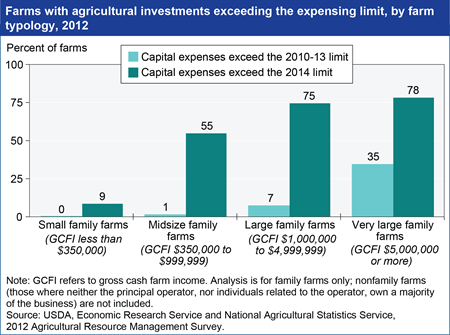