The crop moisture profile continues to look favorable across the Corn Belt after weekend rains and forecasts for above-normal rainfall during June suggest it will stay that way.

If the updated 30-day forecast from the National Oceanic and Atmospheric Administration’s Climate Prediction Center (CPC) is correct, dryness/drought is not likely to become a corn or soybean market issue during June.  If any weather concerns do arise this month, they may well center on too much moisture, rather than too little.

The CPC forecast also calls for cooler-than-normal temperatures across the northern half of the Corn Belt from the Dakotas and western Nebraska eastward through Minnesota, Wisconsin, Michigan and northern Ohio.

The crop moisture profile was rated satisfactory to abnormally moist across the Corn Belt as of Saturday by the CPC.

Some locations in Minnesota may have received too much rainfall over the weekend. Redwood Falls, Minnesota this morning reported a three-day rainfall total of 4.46 inches, while one Minnepolis reporting station received 4.37 inches. 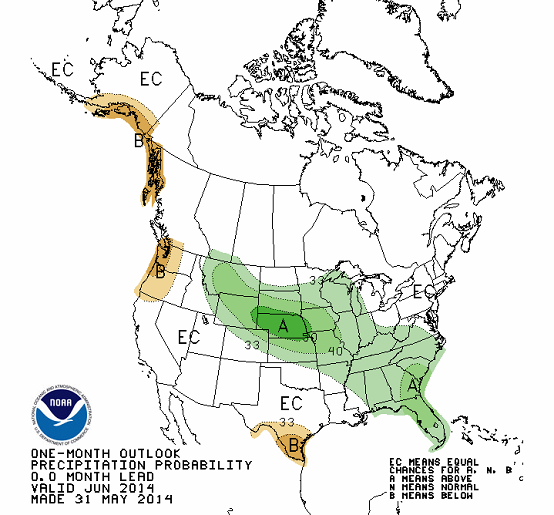