Friday afternoon’s annual USDA Cattle Inventory Report is expected to show that the total U.S. cattle herd shrank for the year in a row during 2013, but signal that expansion of the beef cattle herd got underway as sharply lower corn prices drove feeder cattle prices to record highs.

In a Reuters News Service survey of five livestock analysts estimates of the total U.S. cattle/calf herd averaged 98.6% of a year earlier in a range from 98.0%-99.1%. At the average of estimates, the Jan. 1 cattle herd would be 88.05 million head, down from 89.3 million a year earlier.

Estimates of the number of cows/heifers that have calved averaged 98.7% of a year earlier, but expectations for the number of heifers retained for beef replacement purposes average 103% in a range from 102.4%-103.5%. 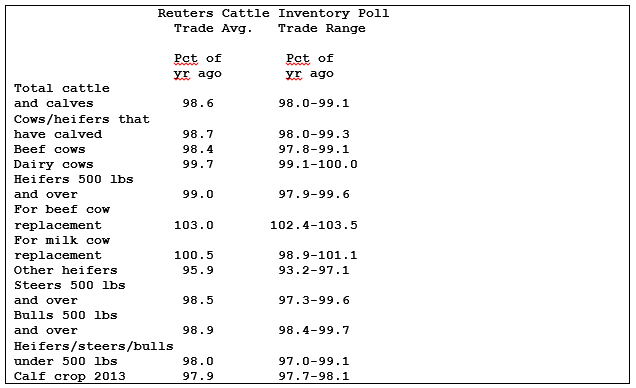